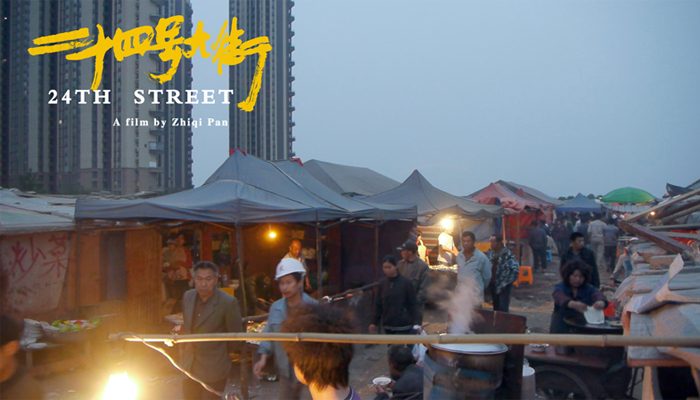 Chinese director, Zhiqi Pan, reports on the impact of his participation at Asian Side of the Doc 2015 workshop and marketplace event, and the completion of his documentary project “24th Street”, that has premiered in Europe in the 2017 IDFA Competition for Feature-Length Documentary.

Taking part in Asian Side of the Doc and a number of international platforms can attract international funds and opportunities of co-production. For producers and directors who have just entered the international market, it can be way more important to get comments, key insights and suggestions through such forums or workshops, to help re-think your story, develop your story and learn how to storytell with more international perspectives. 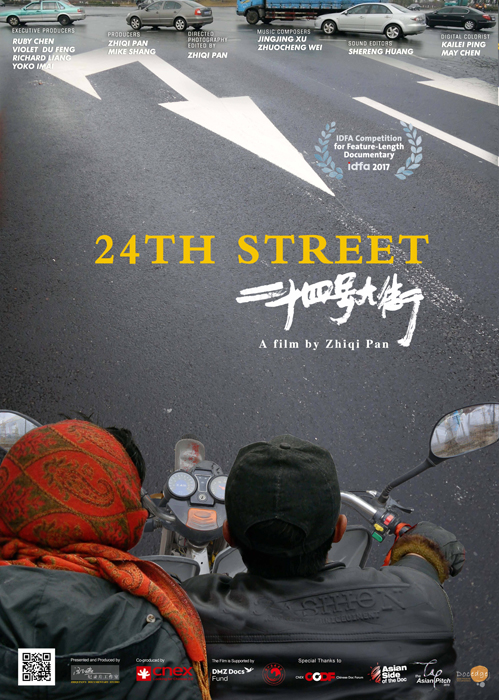 The documentary project  “24th Street “ (Zhiqi Pan Documentary Studio & Mike Shang, China) was successfully developed and pitched in the framework of Asian Side of the Doc 2015 in Xiamen (China). It was also a Winner of The Asian Pitch (TAP) the same year.  What followed on from your pitch and which new partners did you attract ?

After the framework of the Asian Side of the Doc 2015 in Xiamen (China) and the Asian Pitch (TAP), the project also won the DMZ international documentary festival’s funds, and was invited to join workshop and pitching of the DocedgeKolkata, Asian Forum for Documentary held in India. During the period from 2014 to 2016, our project was constantly exposed to a lot of co-production opportunities by joining in different workshops and forums. And it’s exactly the way that the story of the project developed and matured.

What have been your key takeaways from Asian Side of the Doc’s project development workshops in 2015 in Xiamen?

I pitched 24th Street for the first time at CNEX Chinese Doc Forum 2014 in Taipei. Our project was selected by Yves Jeanneau to join the Asian Side of the Doc’s project development workshop organised in Beijing, 2015. Both Lixin Fan and Heidi Fleisher were the mentors of the project. With their help, I was inspired to think better about the differences between 24th Street and the films of same topic about the migrant workers in the past, try to figure out the uniqueness of this story and its realistic relationship with the current Chinese society, which is vital to the further development of the project.

Two years later, « 24th Street » is now completed and has premiered in Europe in the 2017 IDFA Competition for Feature-Length Documentary.  How was the film received and in how many countries will it be released ?

Since being premiered in IDFA in 2017, 24th Street has received several invitations from other film festivals and will be screened at film festivals in Sweden, Czech Republic and India etc, in 2018. The TV version was globally distributed by Looking Glass International, and the exposure generated by this European premiere in IDFA played a key role in a successful distribution.

From your successful record of co-producing with Asian pubcasters NHK, KBS and PTS, what are the challenges in making stories go from local to global and how do you manage to overcome them?

In order to tell a native Chinese story for global audiences, you have to face the challenges of various cultures, social systems and backgrounds in different regions. So after the 24th Street 48min TV version signed the co-production agreement with the 4 pubcasters of The Asian Pitch (TAP), NHK, KBS, PTS and Mediacorp, TAP designated NHK as the TV version supervisor, and Yoko IMAI as the producer.

Getting these broadcasters and producers involved in the production of this film can absolutely overcome some of the previously mentioned challenges of culture, background, institutional differences, and as well as to make the story narration to be understood by the global audiences easier. These experiences are also great helpful to the production of the 90mins Feature version.

What advice would you share with emerging Asian producers looking for financing/partnerships in the international factual market?

Seeking for international markets funds and cooperation mainly depends on the characteristics of your story, you’d better to have a good story with strong character as well as the narrative methods which match the taste of the international audiences.

Taking part in Asian Side of the Doc and a number of international platforms can attract international funds and opportunities of co-production. For producers and directors who have just entered the international market, it can be way more important to get comments, key insights and suggestions through such forums or workshops, to help re-think your story, develop your story and learn how to storytell with more international perspectives. Of course, you’re the person who knows your story best, but remain sober-minded when facing opinions from all different sources and then make your own decisions.

What’s the next story you’re working on?

My next film, The Paradise Garden, is about the story of a mother-to-child story in fast-developing China. 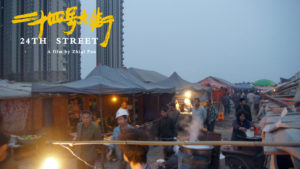 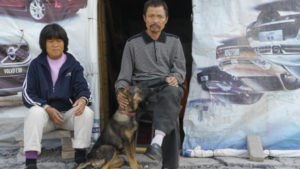 China doesn’ t have a lot of room anymore for peddlers like Su. He set up a ramshackle restaurant next to a construction site on 24th street in Hangzhou, but of course he neglected to obtain a permit. Unsurprisingly, the authorities send him and the other illegal dwellers away. Unfazed, Su and his girlfriend Qin find another place for their restaurant, only to be sent away again. Su then decides to go back home to the countryside, where his wife and children, along with Qin’s family, still live. After being away for 30 years, the couple isn’t exactly welcomed back with open arms. Filmmaker Zhiqi Pan usually observes Su and Qin’s adventures without comment, but does step in on occasion, such as when the unscrupulous Su is trying to cheat people. With its colorful main character, 24th Street offers an original twist to the story of modernizing China—and those on the fringe who can’t keep up.